Monday the 9th of February 2015 marked the day of Leiden University’s 440th Dies Natalis. It also marked the day that LUC alumna Sophie Starrenburg, Class of 2014, was rewarded the Best Thesis Award of Leiden University, and gave a speech about her Capstone project at the Dies Natalis. We believe this was a huge honour for Sophie, and thus we asked her to share some of her experiences of that day with us: 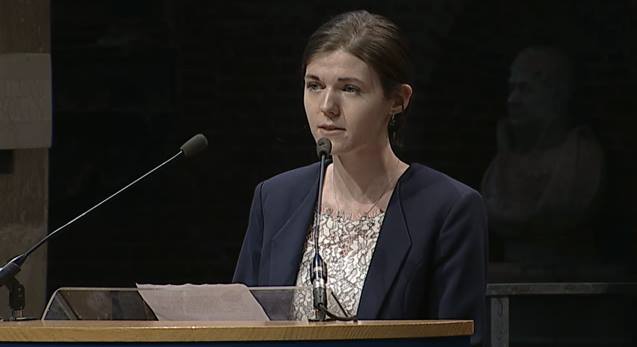 Last Monday, the 9th of February, I was given the amazing opportunity to speak at Leiden University’s 440th Dies. It was pretty exciting, as I had never been to a Dies in Leiden, only to those of LUC; as such, it was a lot of fun to experience all the pomp and circumstance that comes with the event, and also to get a sense of how LUC, as an institution, fits into the broader picture. This is only the second year that the University has chosen to let students speak about their theses at the Dies; the main motivation is to showcase that student research can also be very interesting. Each of the faculties was asked to provide theses from the previous academic year which had been given internal/external awards; a panel headed by the vice-rector then went through all of the nominations and chose one to be presented at the Dies.

Short recap of my Capstone, for those unaware: I looked at the ways in which international law protects tangible and intangible forms of cultural heritage, concluding that the current approach doesn’t work too well. I argued that the criminalisation of cultural genocide (which had originally been part of the concept, but was scrapped from the Genocide Convention) could provide a possible solution, as it captured the effect that cultural destruction can have on groups and could possibly aid timely intervention in potential genocidal situations.

In the run-up to the day, after practicing with an organising member of staff, I was essentially given one message: the speech needed to be slower, shorter, and simpler. She also informed me that there would be 1200 people in attendance, a matter of which I had been blissfully unaware up until that point (let’s just say I wasn’t exactly primed to present to crowds of that magnitude). Despite the existential angst produced by being forced to reduce one’s Capstone to essentially 500 words –as well as many practice sessions in which I forced myself to speak ever slower and slower –I managed, and by the time the actual day rolled around, I felt pretty prepared (but also experiencing what one might call impostor syndrome). The worst moment was waiting by the side of the stage as I was introduced, but once I was behind the podium and started speaking, I got into the flow of things – and before I knew it, it was over!

In the end, the whole experience was far more fun than I would have thought it could be: I got a lot of nice reactions afterwards, and entered into some interesting conversations with some of the attendees (was pulled into a conversation with one of the honorary doctorates, Peter Katzenstein –I could have probably really used a World Politics or Human Interaction major with me at that moment!).

Here’s to hoping that we’ll see another LUC’er on stage next year –and that all my fellow alumni are doing well, wherever you may be.