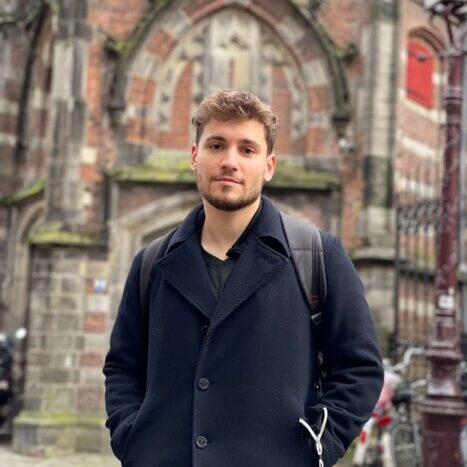 Did you know? Growing up in the French Pyrenees, Ben has been obsessed with nature from a young age

Lone: Hi Ben, thanks for taking the time to chat with us! You graduated from LUC in 2014 with the second cohort of graduates and a major in Policy Science, the major currently called GED. How was your experience at LUC?

Ben: Honestly, it was amazing. After my Bachelor’s I did a Master’s in Public Policy at UCL, which comparatively helped me appreciate LUC a lot. That Socratic process, with everyone in the room just hashing it out, presenting and debating… That is incredibly powerful pedagogically, and it makes for great personal connections. I’m not aware of many institutions where you can get that kind of experience. All the materials that I covered at a Master’s level, I had already covered in years one or two at LUC. Plus, the small classes at LUC allowed for close relationships with other students and professors.

Still, I can imagine it was quite a leap. When you started LUC, the ‘pioneer’ class of 2013 had not even graduated yet.

Ben: I guess it was a bit of a leap. I was graduating from a high school in Spain at the time, and as in most of Europe, you have to decide at the age of 18 if you want to go into social sciences, humanities, or hard sciences. You’re then in a walled-off section of what you study and decide for the rest of your life that that’s what you’re committing to. That’s a terrifying thought, so even though LUC wasn’t well established yet, the format of liberal arts seemed amazing. It also serves well in a professional landscape, because I quickly found that things aren’t walled off there either. At the startup I’m at now, I had to do 1000 different things, ranging from operations to engineering and human resources. A single specialization isn’t enough, you really want to learn how to think critically and learn in fields that you’ve had absolutely no exposure to.

What would you say is your favourite memory from LUC?

Ben: I really loved Dr. Brandon Zicha’s courses. He always challenged you to deeply examine your arguments and your biases. On a personal level, I will carry the friendships I made at LUC with me for life.

What made you move to London after?

Ben: My reasons for seeking that were more personal than they were professional planning. I grew up on the European continent, but I am not a citizen of any EU country. So I was hoping for a foot into earning residency and then citizenship in the UK, and maybe move to the Netherlands after. As a non-citizen, it’s not easy at all to find a sponsor for a Tier 2 work visa. I ended up in the eyewear industry, which wasn’t necessarily my first choice but it was a valuable professional experience nonetheless. Unfortunately, a few years into that, Brexit happened, and the value of British citizenship wasn’t really there for me anymore. With that math changing, I thought: why not do what I’m passionate about? I was fortunate enough to know the right person and ended up in California with Cove.

Can you tell us a little bit more about what Cove does exactly?

Ben: We’re making a biodegradable water bottle out of a natural material called PHA, which is a naturally occurring carbon-based energy reserve mechanism for microorganisms that occur in soil and oceans. Bacteria that consume carbon will, in certain conditions, take that carbon and store it as a polymer. In an industrial context, you can put a large number of microorganisms in a fermentation tank and feed them a carbon source. That ‘food’ can be anything from greenhouse gases to even waste like used cooking oil, as in our case. The material these microorganisms produce is natural, so if it does end up in the environment it will biodegrade harmlessly within a few of years. We’ve spent a lot of time figuring out how to process that material into bottles. It’s a difficult material to work with, but we expect to launch soon.

What is your own role within the startup?

Ben: I started out as Chief of Staff. Early on, it was mainly trying to figure out how to help the company grow, with responsibilities across many areas. As we started to scale and bring in people who were highly specialized in various fields, my own utility as a generalist was diminished. And so, over time, I started falling back on my ‘expertise:’ environmental science and public policy. My title then changed to Head of Sustainability and Policy. Startups grow organically, so there isn’t necessarily a clear delineation of when your responsibility shifts over. Lately, I’ve been leveraging my background in two ways:

One is addressing the product’s end-of-life. In other words, what do you do with a bottle after it’s been used? We don’t want a biodegradable product to just end up in landfill. Biodegradation in landfill is anaerobic and therefore produces methane, a powerful greenhouse gas. Although many landfills in the US are capped to prevent emissions, we are working towards a more circular solution. Plastic recycling also has significant flaws. The global recycling rate is around 9%, which is partly a function of the fact that there are many different types of plastic and of the fact that  plastic products tend to combine multiple materials in one package. So there’s still a lot to figure out.

The second aspect of my responsibilities is regulatory. Both in California and at the federal level, there are complex regulations around the circular economy, biodegradability, compostability, and other related issues. So I spend a lot of time working with various organizations, including legislatures, to work on policies and standards that will bring about a more sustainable future.

Are these regulatory hurdles specific to California & the US?

Ben: As every company is trying to label themselves as ‘sustainable’, marketing teams are often incentivized to make as many environmental claims as possible. In the world of consumer packaged goods (CPG), such claims include “renewable”, “bio-based”, “compostable” and “biodegradable”. Meanwhile, many jurisdictions, including in the European Union, have few (if any) rules around what products actually qualify for making such claims. And even if there are rules, enforcement of those rules often isn’t there.

Because consumers don’t have the time to do deep research, and because this topic is fairly technical, they end up being misled about the sustainability of the products they purchase. In turn, this makes it difficult for companies that are genuinely innovating to stand out to consumers who deeply care about promoting truly sustainable products.

Until environmental marketing claims are regulated in a way that ensures that consumers cannot be misled, this will continue to be a challenge for sustainable packaging innovation all over the world.

Where did your interest in sustainability come from?

Ben: Since I was very young, I was obsessed with David Attenborough documentaries. I also grew up in a small, 80-person village in the heart of the French Pyrenees. We would hunt mushrooms every autumn, ski every winter, plant vegetables every spring, and swim in rivers every summer. It taught me a lot about the importance of being in harmony with nature.

Would you say that the sustainability aspect is the most rewarding part of your job?

Ben: It’s simultaneously the most rewarding and the most frustrating. Especially on the regulatory side, depending on whether a project goes well or not, it can feel like you’re either breaking through a wall or constantly hitting your head against one. You try to bring people together, you tell them about what you’re trying to do and you try to convince them. It either works and you feel amazing because you’re moving something consequential in the right direction, or it doesn’t and you feel like you can’t change anything at all. Still, I’m extremely grateful that I get to be immersed in the process of trying to make a better world, even if it doesn’t always go as I’d like it to.

How well do you think LUC prepared you for this work?

Ben: A lot of how I’m able to do what I do comes from my experience at LUC. Just by virtue of being residential and in close quarters with a lot of people, you’re often debating and trying to sell arguments to individuals who may have very different perspectives. Sometimes, whether someone understands your argument or not is maybe more a function of how much they like you. Conversely, if you dislike someone, you still have to try to work closely & collaboratively with them, because you all live in the same building. In that process, you debate, you collaborate, and sometimes you take a step back and reevaluate your approach, or even your perspective. You get so much practice in all of those things at LUC, and it’s extremely useful in the real world. And not just in a professional sense.

Looking back on your work and your studies, what would your advice be for someone who is just about to graduate and also wants to work in a start-up, for example?

Ben: The first piece of advice is to work hard to build genuine connections with people. A lot of people think very transactionally about networking: going to formal events and talking exclusively about business to get a leg up. That can be useful. But when you build meaningful relationships, you have a much better sense for how you might work together. Knowing exactly how someone’s personal and professional strengths would complement an organization can be significantly more valuable than an impressive CV.

The second piece of advice is to be open-minded about your future opportunities. For example, I was initially caught up in the idea of working at a large organization to build credibility on my résumé. I quickly learned that large organizations have a lot of red tape around what you can and can’t do and how to go about it. In contrast, startups allow you to work towards long-term goals more creatively. It can be scary, but it’s an incredible way to develop your resilience and drive.

Bonus tip, if you have a great idea, and a lot of persistence, try to build your own company! Entrepreneurship drives innovation, and the world needs more of both.

This post was part of a larger series of “portraits” of Alumni. Want to be featured, have questions for Ben, or about alumni in general? Do not hesitate to reach out to Evolucio via our website, Instagram, LinkedIn, Facebook or info@evolucio.nl.